Teaser Tuesdays is a weekly bookish meme, hosted by MizB of Should Be Reading. Anyone can play along!

Taylor Sullivan took her life for granted until she received news that would change her life forever. In a state of denial she met Kyle, who didn’t end up being what she expected. She wasn’t able to escape her new reality, but with his friendship, just maybe she could survive it. 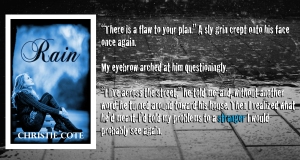 “There is a flaw to your plan.” A sly grin crept onto his face once again.

My eyebrow arched at him questioningly.

“I live across the street,” he told me; and, without another word, he turned around toward his house. Then I realized what he’d meant. I’d told my problems to a stranger I would probably see again.